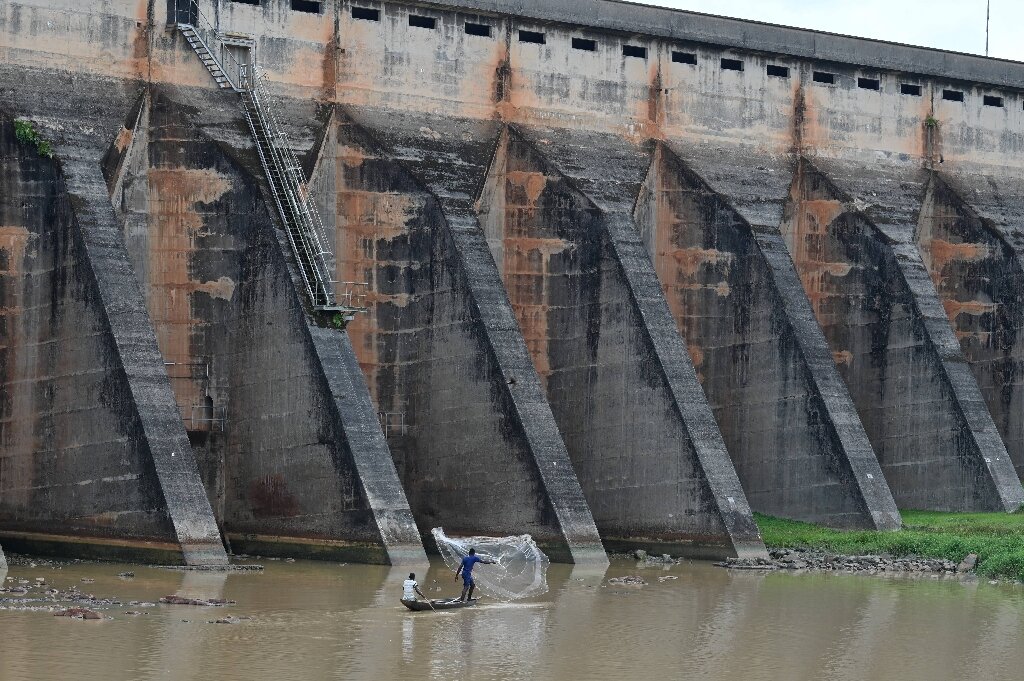 “We have no water,” Ladji Kone Vacaba, head of the Ayame dam in southeastern Ivory Coast, said bluntly. “Water is the dam’s raw material. Without water, we can’t produce electricity.”

Ivory Coast has been gripped by power cuts since April when a crash at its main fossil-fuel plant combined with a drought crippled its hydro-electric output. The start of the rainy season this month is Vacaba’s only hope for relief. “It hardly ever rains,” he said. “The water level has dropped by five meters (more than 16 feet), something that hasn’t happened in more than a decade.”

“We are going through a period of drought that affects all the dams in the country—Kossou, Taabo, Soubre, and Buyo.” The Ayame dam presents a sorry sight. Birds stand undisturbed on boulders that have been exposed by the retreating muddy water.

Downstream in the Bia river, the low water is the ruddy color of clay. Desiccated trees without the slightest foliage rise out of the water. Even so, fishermen in canoes venture out to cast their nets, hoping to be able to haul up a few fish.

From surplus to deficit

In normal times, Ivory Coast’s electricity capacity has more than enough to meet domestic demand—the surplus is sold to its neighbors. It has an installed capacity of 2,300 megawatts, the largest in French-speaking West Africa, compared to peak consumption of 1,600 MW. Three-quarters of production is provided by conventional fossil-fuel plants and the remainder by hydroelectricity. But in April, a breakdown occurred at the Azito fossil-fuel plant in the commercial capital Abidjan, which generates a third of the country’s electricity. Facing power shedding and angry customers, the authorities “maximized hydroelectric production while the water level dropped in the dams,” said the minister of mines, oil, and energy, Thomas Camara.

Today, households get power for just six hours a day and industrial customers 16 hours every two days. “The situation has much improved” since then, Camara argued. “There is no more rationing at night or at the weekend.”

“The rainy season is coming, the water level will recover and we will have all our capacity available to cover demand,” the minister predicted. “By mid-July, we will definitely get out of this rationing situation.” The president of the Confederation of Consumers of Ivory Coast (COC-CI), Jean-Baptiste Koffi, said the system had placed “consumers in difficulty.” Tradesmen and restaurants “suffer an operating loss of around 50 percent because of the power cuts,” he said.

The leading economic power in French-speaking West Africa, Ivory Coast currently has a network of 5,000 kilometers (3,100 miles) of high-voltage lines.

In 2020, it exported 11 percent of its electricity production to six neighborhood countries—Ghana, Togo, Benin, Burkina Faso, Mali, and Liberia. The government aims to boost capacity from 2,300 MW to 6,600 MW in 2030. But Koffi said the goal would not resolve problems that arose when the country depended on a single supplier.

The Ivorian Electricity Company (CIE), privatized in 1990 and owned mainly by pan-African group Eranove, has a monopoly on producing, transmitting, distributing, and selling electricity. “Wherever there is a monopoly, the consumer never gets a fair deal,” said Koffi.

The CIE has already had to face a rebellion from its customers when an increase in electricity prices fuelled a wave of discontent in 2016. “We condemn this monopoly and call for the opening of the market so that the consumer’s right to choose is guaranteed,” said Koffi.