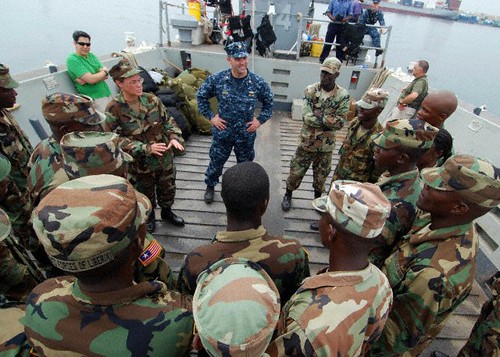 (Image: “AFRICOM: Liberia Coast Guard Base” by USAFRICOM is licensed under CC BY-NC-SA 2.0)

The US Government has donated a large consignment of equipment valued at over $USD 113,000 for the Liberian Coast Guard to enhance its operational capacity.

The items donated include five 40 hp Mercury engines and assorted spare parts for the Liberia Coast Guard operational boats. Making the donation on Thursday, June 17, 2021, the United States Ambassador accredited to Monrovia, H. E. Michael A. McCarthy, said the donation is intended to increase the operational readiness of the Liberian Coast Guard.

Ambassador McCarthy noted that since the activation of the Coast Unit of the AFL, the United States Government has spent over $USD 3 million on the development of the necessary Coast Guard infrastructures at their base and at the Port of Buchanan. The US Ambassador asserted that the US has also provided several training opportunities for Liberian Coast Guard personnel as well as the Liberian armed forces, adding that the US government remains supportive of the activities and professional development of the AFL and the Liberian Coast Guard.

The Deputy Defense Boss for Operations used the occasion to appeal to the Government of the United States to provide more training opportunities for personnel of Central Administration and the Armed Forces of Liberia. He said he looked forward to re-energizing all of the programs within the defense sector for the benefit of the AFL and staffers of the Ministry of National Defense. With the growing wave of piracy in the Gulf of Guinea, the donation will enhance Liberia’s Coast Guard capability in responding to illegal activities in Liberia’s territorial waters.