Food Insecurity in Nigeria: Current Legislation Is Unlikely To Ease the Pain 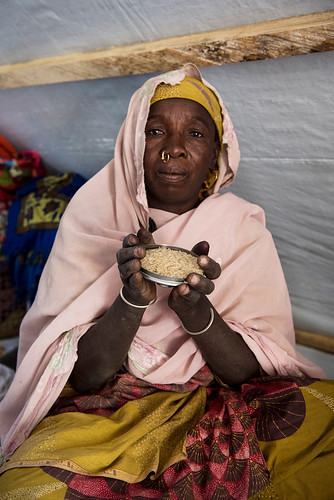 (Image: “Woman displays rice purchased with an electronic voucher in Nigeria” by USAID_IMAGES is licensed under CC BY-NC 2.0)

The skyrocketing prices are forcing consumers to eat less and sometimes go without some foods altogether. In the most recent Living Standards Measurement Study 44% of Nigerians were “Unable to eat healthy and nutritious foods because of lack of money” (NBS). While in the South East region almost 63% of respondents lacked money for food (NBS).

What’s worse, almost 70% of Nigerians have no coping mechanism, that is they have no alternate way to obtain food. Of the ones that do have options, 10 percent chose to just have less food, while almost 17% turn to friends or family for help (NBS).

The COVID-19 pandemic has hit the informal economy the hardest. On average about 56% of Nigeria’s GDP comes from the informal economy (Central Bank of Nigeria). Right now, over 33% of Nigerians are unemployed (Nigerian BLS) making them vulnerable to food price increases. However, even Nigerians that are working have to take out loans to afford food. The Africa Report interviewed one woman who shared her predicament, “Even before the coronavirus, many of us have been struggling to feed our families due to the high cost of food and other expenses and have been relying on loans to make ends meet.”

A worsening food insecurity problem is certain to cause civil unrest. This will stress an already stretched and unreliable police force. The police in Nigeria number about 372,000 officers in a nation of about 2 million people. The UN general rule of thumb for effective police capacity is one officer for every 500 citizens—to save you the math, Nigeria’s ratio is 0.93 per 500 people. Yet the UN also cautions that this ratio must be adjusted depending on the situation: a peacekeeping operation requires more police than “a stable country in which the rule of law is firmly established.” For example, Lincoln, CA has 0.2 officers per 500 residents whereas New York city uses 2 officers per 500 people (source: Governing).

The new acting Inspector General of Police Usman Alkali Baba is likely to begin recruiting more officers but it could take up to five years to staff and train new recruits (dailypost.ng).

The COVID-19 pandemic exposed the risk of Nigeria’s (and Africa’s) dependence on global supply chains then pushed the fragile system over the edge.

But even before the COVID pandemic, Nigeria was struggling to meet the demand for food and was heavily dependent on imports. In order to boost domestic production, the Buhari administration closed the borders to Benin (a popular trade and smuggling route), then imposed trade restrictions on dozens of food items. This sent prices soaring. The closing of the country (and essentially the economy) in response to COVID hit the economy, once again sending prices skyward.

The price increases in foods were compounded by a weak Naira and a dearth of staple items, like breads, meats, fish, potatoes, vegetables, fruits, and cooking oils (NBS)—that’s basically everything one could eat. The local lack of supply is in turn driven by a neglected agriculture industry, insecurity in farming areas, and trade restrictions.

When first taking office in 2015, President Buhari imposed those import restrictions on dozens of food items to boost domestic production, which it did somewhat. But the Nigerian agriculture industry has never been able to meet demand, which was why they were importing food in the first place. So while production increased somewhat, it was still not enough to meet demand.

The violence by Boko Haram in the North East region has forced many farmers from their fields. Last year, in one of Nigeria’s deadliest attacks, Boko Haram beheaded over 100 farmers. Since 2009, at least 36,000 have been killed and over two million people have been displaced (SonkoNews). Add to that a rising conflict between mostly Muslim herdsman and mostly Christian farmers in the Middle Belt that is costing Nigeria 44% to 75% of its revenues (McDougal). Both regions are responsible for most of the food production in the country.

President Buhari was very clear about how he felt about paying for food importation. He tweeted in September of last year:

I am restating it that nobody importing food or fertilizer should be given foreign exchange from the Central Bank. We will not pay [one cent] of our foreign reserves to import food or fertilizer. We will instead empower local farmers and producers. (Twitter)

But the Finance Act 2020 which eases import duties on transportation, and agriculture machinery and the Anchor Borrowers’ Program which provides low-interest loans to small-holder farms that can be repaid with crop yields at the processor have yet to make a difference to inflation. And neither is likely to in the face of violence and the COVID-19 crises.

In the near-term, it’s unclear how the administration can quickly improve the food crisis without easing some import restrictions. If nothing is done, one can expect food prices to continue to rise and with it the potential for civil unrest as more people become unable to afford food.

The COVID19 pandemic has exposed the fragility of global supply chains, especially when it comes to food. But Nigeria has been slower than her neighbors to roll out the vaccines. So far they have only been able to vaccinate 0.5 percent of the population, compared to Senegal and Ghana who have vaccinated about two percent of their population (AllAfrica). Until the vaccines are in everyone, Nigeria and the economy remain at risk.

Research Slider What to Watch

May 5, 2021 Adam Ragozzino
Slider What to Watch

One thought on “Food Insecurity in Nigeria: Current Legislation Is Unlikely To Ease the Pain”