Benin Was A “Stable” Democracy 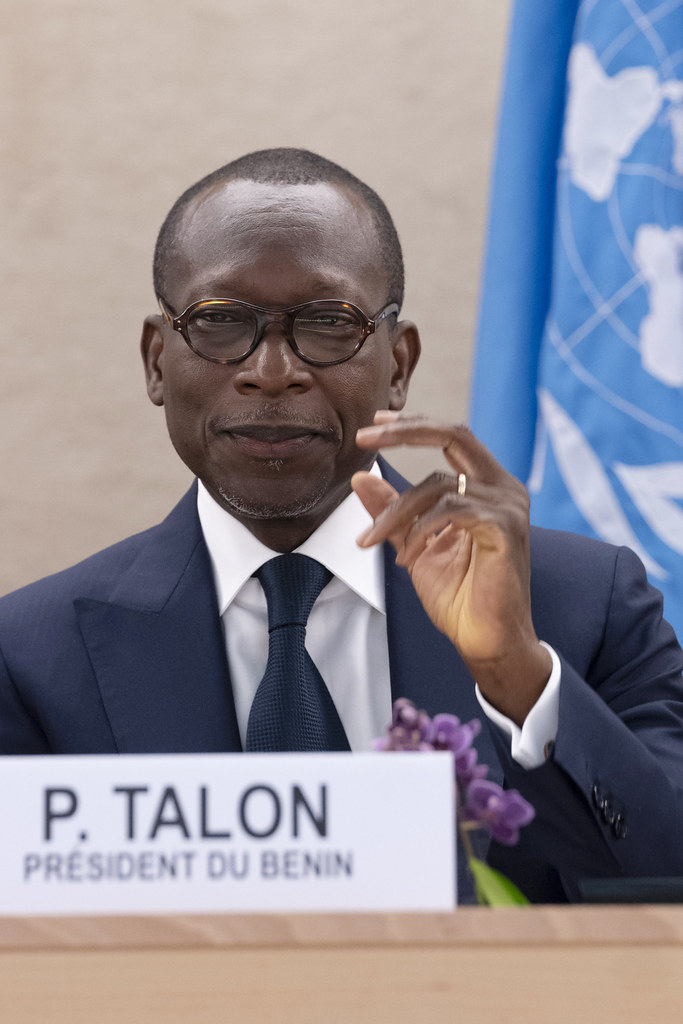 “Official visit President of Benin at the United Nations” by UN Geneva is licensed under CC BY-NC-ND 2.0

But Is There Really Such A Thing?

What could have been Benin’s first female presidential candidate, the leader of the opposition party Les Democrates, Reckya Madougou, was arrested earlier this month (3MAR21) and charged with financing terrorism. It happened just as she was finishing a meeting with other opposition parties to discuss backing a new candidate as a coalition after all but two of the opposition candidates failed to meet the requirements to get on the ballot.

According to Joël Aïvo, an opposition candidate who was there that evening, the police surrounded the building in Porto-Novo where the meeting was held. Madouogu, Frédéric Joël Aïvo and Ambassador Moïse Kérékou, son of former President Mathieu Kérékou, along with a driver were allowed to leave before police stopped their car on the Porto-Novo bridge. Police forced the driver, Aïvo and Kérékou out of the car then took the car with Madougou still in it to the Cotonou Economic and Financial Brigade. None of the other candidates were arrested that night. Joël Aïvo later posted to his facebook page describing the event The failed candidates were meeting to discuss backing Mr. Aïvo for president as a coalition, the Front de Restauration de la Démocratie (FRD).

The day before her arrest, Minister Madougou had called for an investigation into the Court for the Repression of Economic Crimes and Terrorism (CRIET) for the arrest of two other Les Democrates party members Bio Dramane Tidjani and Mamadou Tidjani. Madougou’s Facebook post

According to Madougou’s campaign team, the arrests were directed by current President Patrice Talon who has been clearing the field of political opponents before the April 11th presidential election.

President Talon didn’t imprison just one of his competitors, in the past three years he eliminated all of the competition.

Of the twenty candidates who applied to run in the election, only two were approved by the electoral commission. The approved candidates are former minister Alassane Soumano of the Force cauris party for an emerging Benin (FCBE) and Corentin Kohoue, of the Restaurer La Confiance (RLC) party, both are political allies of Talon. And neither candidate is likely to beat Talon.

The other 18 candidates (including Madougou) failed to meet the new election requirement of 16 signatures from current mayors or members of parliament. That’s not surprising given that the 2019 Parliamentary election had no opposition party members–leaving few politicians willing to sponsor opposition candidates.

This is part of a larger “electioneering” trend in the West African region where candidates from opposing parties are hampered, disqualified, or removed from running. Incumbents often change the constitution to allow extra terms in office and pack the constitutional courts to favor their election.

In almost every instance, this type of “electioneering” has led to protests that result in violence before, during, or after the elections.

According to the insurance journal, “Civil unrest incidents such as protests and riots are challenging terrorism as the main political risk exposure for companies.”

Mastercard determined political violence even effects the economy beyond the direct impacts of destruction of property and business closures. It deters investment, displaces millions, and causes insecurity fears to further degrade economic investment.

Politically motivated violence has important economic effects. Apart from the direct impact of terrorism on its victims, it deters investment in education and businesses. And the fear of violence has driven millions of people away from their homes every year, subjecting them to terrible hardships.

The economic effects of violence can also be felt in the wider economy. Political violence fuels an element of fear that amplifies the effects of individual attacks. As fear spreads, citizens may question whether governments have the power to provide security, which can have further detrimental economic effects. -Master Card

Before President Talon came to office, the country was often referred to as a “model” or “stable” democracy. It enjoyed peaceful transfers of power over the last 30 years. But calling the country “stable” because power transferred peacefully (while definitely a good thing) glosses over events leading up to the election. For example, former President Kerekou was re-elected president in 2001 because all of the other candidates withdrew in the second round of voting alleging fraud. Former President Yayi Boni instituted election “reforms” that allowed him to win re-election in the first round of voting–he was the only president in the history of Benin to do so. Boni was also put up for impeachment (it failed) for defrauding hundreds of thousands of voters in a ponzi scheme. So yes power transferred peacefully in each case but political tensions were building.

In 2013, there was a failed coup to oust Boni that came only two years after the second assassination attempt. Both events were linked to current president Patrice Talon who was then a political ally of Boni. Talon fled to France and was later pardoned by Boni.

Today, ten election observers from the Economic Community of West African States (ECOWAS) arrived in Porto-Novo for a 25-day period. Yet, the election in April already appears skewed in Talon’s favor. The run-up to the election and Talon’s expected win will likely result in protests which in the past were met with violence. Additionally, Talon has used internet blackouts as a way to quell dissent and reduce international attention. Expect more of the same as Talon holds power.