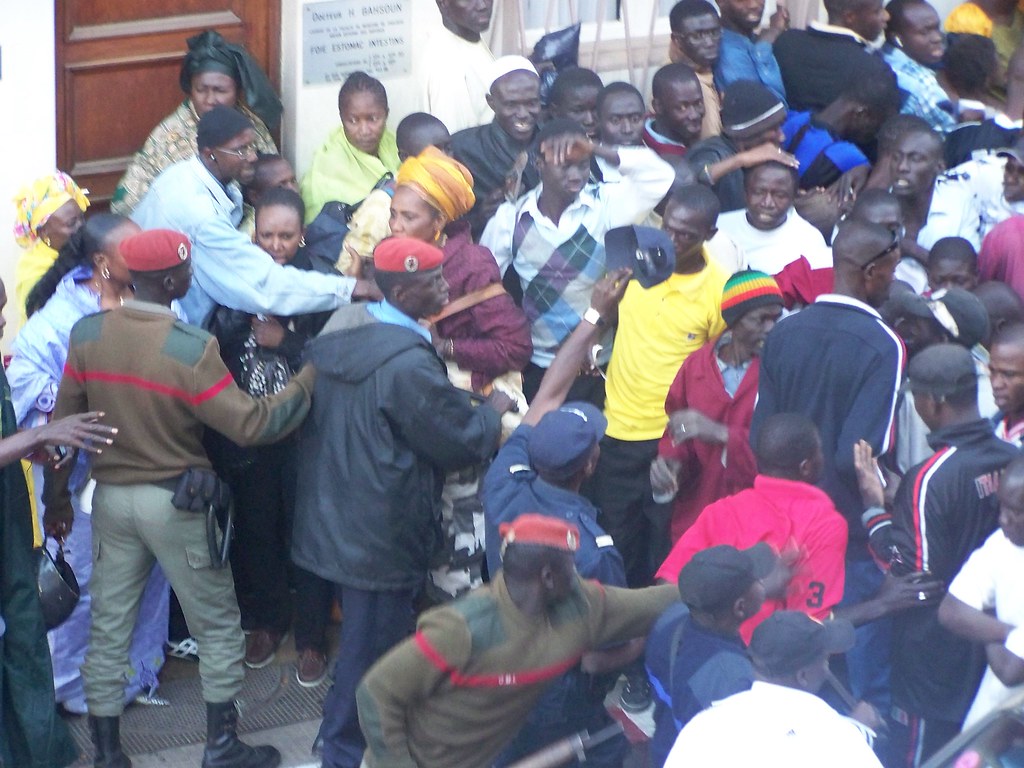 Source: “Audition de macky sall” by Serigne Diagne is licensed under CC BY 2.0

Hundreds of supporters of opposition leader Ousmane Sonko clashed with police last Wednesday (3MAR21) while the former presidential candidate was heading to court to face a rape charge. The government blamed Sonko for the clashes, charged him with disturbing the public order, and had him arrested.

His arrest sparked more outrage among his supporters. This time thousands took to the streets claiming the accusations of disturbing the public order, rape, and subsequent arrest were all politically motivated. Protesters once again clashed with police who responded with tear gas and rubber bullets. Amnesty International estimates at least eight people were killed during the clashes.

The protests finally subsided after the court released Sonko from jail on Monday. Although, the charge of rape still stands.

Sonko has since called for even more of his supporters to continue the rallies this week, though he emphasized ‘peacefully.’

Why Does it Matter?

Sonko is viewed as a leading candidate for the 2024 presidential election in which current President Sall, theoretically, cannot participate. The accusations against him fit a suspicious pattern Sall used in the past.

In 2019, Khalifa Sall, a former Mayor of Dakar, and Karim Wade, the son of former President Abdoulaye Wade, prominent rivals of President Macky Sall, were also indicted on criminal charges that prevented them from running for president. The charges were dropped after the election.

It’s possible that Sall or his party, Alliance for the Republic, APR-Yaakaar, are paving the way for Sall–unlikely given he presided over the referendum to set term limits but not out of the question–or their party candidate in the next election.

There is another aspect to the rape charge that the Washington Post’s Borso Tall and Danielle Paquette covered. It’s the idea that regardless of the veracity of the charge, people have already discounted the accusation as a political tactic. It’s difficult in any country to come forward as a rape survivor. This will make it more so.

This is all too familiar. Leaders seeking third terms (Alassane Ouattara of Ivory Coast and Alpha Condé of Guinea come to mind) or tilting the election towards their party candidate (Niger, Ghana) has become commonplace in the region.

Yet, the track records of these incumbents do not always merit keeping power. Their governance more often disproportionately benefits their supporters and elites. Indeed most of the anger in last week’s riots were fueled by growing resentment over coronavirus restrictions (which disproportionately affect the lower-earning informal economy), unemployment, corruption, and an ineffective and increasingly authoritarian government.

It’s not just West Africa. Globally, there has been a spate of unrest in response to democratic backsliding. The riots in Chile, Peru, Ecuador, and Bolivia in 2019 are prime examples of how inequality fueled popular uprisings in what were, historically, stable countries. The riot at the US capitol on January 6 underscored the fact that no country is immune to corruption. It also highlighted the idea that democracies aren’t static, they deteriorate if not maintained.

In the case of Senegal, the country is relatively new to democracy–Senegal declared independence from France in 1960. So it’s less about maintenance and more about establishing a solid foundation after centuries of colonial rule.

Expect sporadic violent protests to continue through 2022 not just in Senegal, but across the region. Until leaders pair their progressive promises with actual progress, it will be the same story.

The tremendous youth population across West Africa should be an economic asset. But poor governance makes it a political burden. Moreover, ineffective governance is one of the underlying ‘invitations’ to violent extremism. Another one is a large pool of unemployed youth. It’s not fate that VEOs will expand into Senegal. But there is no need to make it so inviting.

Like what you’re reading? Sign up for the Africa 21 newsletter and stay up to date on the latest Africa news and analysis.

Processing…
Success! You're on the list.
Whoops! There was an error and we couldn't process your subscription. Please reload the page and try again.