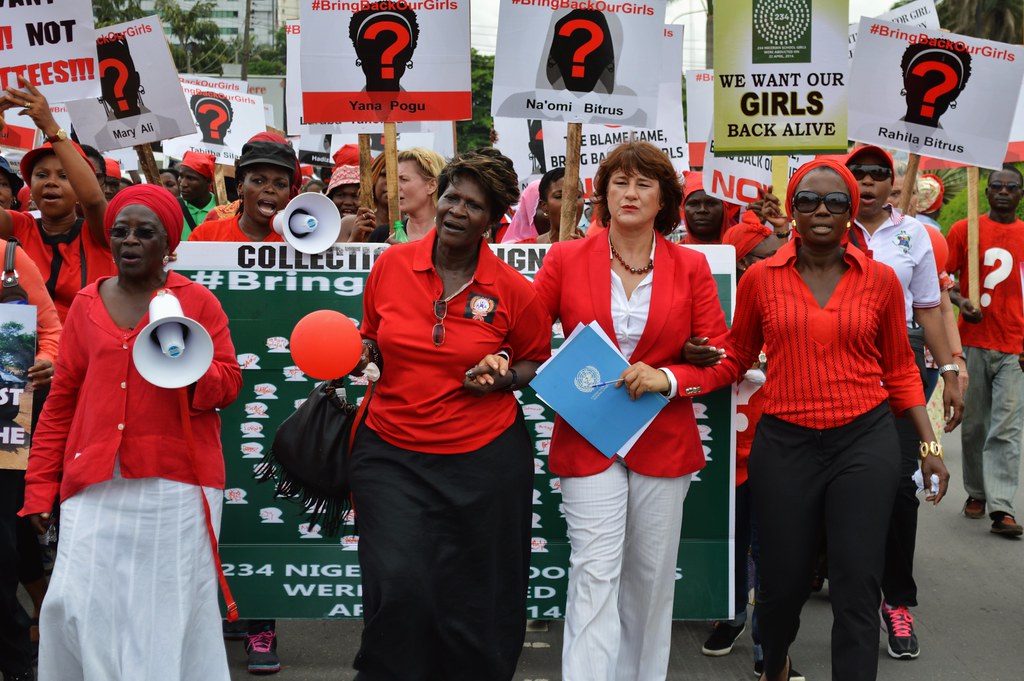 Image: Rally in Lagos for Rescue of Abducted Nigerian Girls by United Nations Photo is licensed under CC BY-NC-ND 2.0

The NY Times reported another kidnapping in northern Nigeria this past Friday. Armed men abducted 317 girls from the Government Girls Secondary School in Jangebe, in Zamfara state. One police officer was killed during the attack.

This is the second mass abduction in as many weeks and part of an alarming trend going back to 2014. When the violent extremist organization (VEO) Boko Haram abducted 276 girls from a school in Chibok, in Borno state.

The current abduction is troubling beyond the kidnapping of students. This particular school was supposedly under the protection of the Nigerian military. The kidnappers attacked the troops as part of a diversion to allow the kidnapping to occur. Additionally, it’s no longer just Boko Haram carrying out the abductions but organized criminal gangs (locally known as bandits) that may work on behalf of Boko Haram or just be copying their tactics for another revenue stream. Either scenario furthers the VEO’s stated goal to end Western-style education in Nigeria.

It seems to be having the intended effect. Yesterday, the Governor in Yobe state ordered all boarding schools closed until further notice.

The government’s inability to protect schools is part of a growing list of state security failures.

Many of the country’s land borders, especially in the north, lack control measures. In an interview with Al Jazeera, Abba Moro, Nigeria’s Minister of the Interior (2013) estimated there were almost 1,500 illegal trafficking routes that the governments was aware of, compared to 84 legal entry routes into the country. These illegal routes don’t just lead to economic loss but they are also exploited by groups like Boko Haram to move weapons into the area.

The seaports are not much better. The port at Lagos and the area around the Gulf of Guinea are the world’s worst waters for piracy. In 2014, an entire tanker of oil was stolen. More often though, just the ship’s crew is held hostage, knowing the transportation company’s insurance will pay the ransom. Even oil in pipelines is hijacked and held for ransom or just stolen right out of the pipe.

In 2015, Boko Haram began using girls as young as 10-years old to carry out suicide attacks. The attacks continued through 2017. Last year, at least 76 farmers were murdered by the VEO. In each case, the government was unable to mount an effective counter-response. Worse, last year’s End SARS protesters were fired upon by their own military—the exact type of violence the movement was protesting. It didn’t help that the military denied the incident and was never held accountable.

Inter-ethnic violence is also on the rise. A market in Ibadan was burned and looted after an incident between a Yoruba and a Hausa sparked a riot. Five people were killed during the riot.

The Indigenous Peoples of Biafra (IPOB), a mostly Christian and Igbo separatist movement, formed its own armed militant wing. The Eastern Security Network (ESN) has been fighting with the Buhari government, whom they say favor Muslims, and against the mostly Muslim Fulani people whom they claim attack the Igbo people.

These security issues are compounded by rising poverty, unemployment rates, wealth disparities, ineffective governance, and a distrust of the government. When combined with the demographics of a growing youth population they conspire to create an environment not unlike what exists in the Sahel, where these very same trends allowed VEO’s to gain a foothold in the outlying regions then thrive despite a decade of military intervention.

Last year the Financial Times described Nigeria as “at risk of becoming a failed state”—which it defined as a government that has lost control. While it’s true Nigeria has lost some control, according to Lionel Beehner and Joseph Young, state failure is not an “all or nothing” scenario. It’s more accurate to talk about failure along a continuum where the government has lost control of some aspects of government responsibility (like security) in some regions while other regions and responsibilities remain stable or even prosper. For example, most of the oil theft occurs in the Gulf of Guinea and Delta state. The school kidnappings occur most often in the northeast but have spread to states in the northwest as well. Inter-ethnic conflict happens most often in the “middle belt,” which is just as it sounds, a region across the middle of the country where the three dominant ethnic groups (the northern Hausa, the Yoruba in the southwest, and the mostly southeast Igbo) most often mix.

But for all of Nigeria’s failings, there are many successes within the country. For example, the education system is free and open to everyone even though poverty keeps many from taking advantage of it, the government recognized the national importance of education. Nigeria has the second-largest movie industry in the world which makes up 5% of its GDP. The country has its own music genre, Afrobeats, which is going global thanks to the Nigerian diaspora.

Nigeria is Africa’s largest economy and it’s growing. Peter Burdin at CNBC wrote, “The country’s tech start-up scene is one of the fastest-growing in Africa, led by Lagos which can claim to hosting {sic} the closest thing to Silicon Valley in Africa.” Nigeria also has enormous untapped resources—the mining industry is almost completely undeveloped compared to the amount of available natural resources. Currently, mining makes up less than 1% of the nation’s GDP.

The government has lost control of the country’s security. The military has been fighting Boko Haram for over a decade. In that time, the group’s leader, Abubakar Shekau, has never been caught. The group was temporarily weakened in 2015 but since joining the Islamic State later that year, they have come back stronger. The NY Times reported they are now better equipped than the Nigerian military and able to carry out attacks with impunity. According to the Armed Conflict and Location Event Database (ACLED), the group has been responsible for over 40,000 deaths since their start in 2009. The latest four-week average of events are up over 400% compared to the monthly average since 2009.

And on the sea

In 2019, the Director-General of the Nigerian Maritime Administration and Safety Agency (NIMASA), the man responsible for safety in the Gulf of Guinea (GoG), Dr. Dakuku Peterside committed his agency to improving security in the Gulf. During that year, the International Maritime Bureau’s (IMB) Piracy Reporting Center logged 44 crews kidnapped off the coast of Nigeria. By 2020, the number of crews kidnapped rose to sixty two.

This year the Nigerian government spent USD $195 million on drones, and added patrol boats to reduce the security burden on the shipping industry—the lifeline for Nigerian oil. So far this year, the IMB reported three ships have been boarded and one was fired upon off the Nigerian coast.

Some of the reasons behind the failures relate to the military leadership. Matthew Page, an associate fellow in the Africa program at Chatham House, said Buhari has been unusually faithful to the military leaders. According to Page, leadership normally changes every 2 to 3 years. But President Buhari has kept the last cadre of military leaders for over 5 years. That was despite their continued failings against Boko Haram. Not to mention Buhari protected the military from scrutiny after they fired upon civilians during the #EndSARS protests.

In January of this year, after a mass student kidnapping in Buhari’s home state of Katsina, the President finally gave in to political pressure to change the military leadership. Lieutenant General Ibrahim Attahiru was appointed the new Army Chief and Staff General Lucky Irabor was appointed new Chief of Defence. In an interview with Deutsch Welle (DW), Kabir Adamu, a security analyst based in Nigeria, suggests its not just the leadership that needs to change. Adamu describes a military lacking in basic coordination and planning capabilities.

The security architecture and security strategy of Nigeria, unfortunately, does not have that element of coordination… There’s a school of thought that the entire security architecture in Nigeria lacks proper monitoring and evaluation. In other words, there are no mechanisms for monitoring and evaluation that would allow anyone to understand what they’re doing.

President Buhari is a retired major general himself. It may be the reason he gives so much leeway to the military, although that doesn’t excuse his tolerance for war crimes. But it does underscore a potential blind spot in his policies. His administration leans heavily on military solutions. In the case of rising ethnic tension in the middle belt, the Sahel serves as a stark warning that not all security situations are solved by just the military.

Moreover, ethnic conflict in Nigeria seems to be more complicated than just religious or cultural differences. According to John Campbell, senior fellow for Africa policy studies at the Council on Foreign Relations, “violence may fall along ethnic and religious lines, but it is not necessarily driven by those distinctions.” It’s as much about economic disparities and access to resources (e.g. water and land) as it is about religion or culture.

President Buhari has two years before the next election (2023-Feb-18). It’s unlikely he will be able to address all the problems in the country in that short amount of time. But an overhaul of how the military operates may be a good place to start.

The lack of security in the country creates a vicious circle. For example, the Buhari administration announced plans to expand the mining sector to 3% of GDP by 2025. It is a natural choice for providing more jobs and diversifying the economy away from oil. But as was the case in the Sahel, without adequate state security, non-state actors and armed gangs began to compete with corporations for control of mine resources. A continued weak economy drives theft in the GoG, and banditry on land. But inadequate security is unable to prevent thefts which continue to weigh down the economy.

The military cannot solve everything. But a functioning and accountable security service is a critical element for keeping Nigeria stable and growing.

Want to read more about what’s happening in Africa? You can sign up for the Africa 21 newsletter here:

Processing…
Success! You're on the list.
Whoops! There was an error and we couldn't process your subscription. Please reload the page and try again.

Want to read about some of Nigeria’s successes?

Or listen to Afrobeats

One thought on “Hundreds of Nigerian Students Kidnapped… Again. Is Nigeria a failed state?”